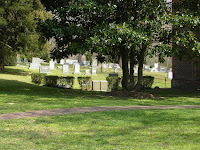 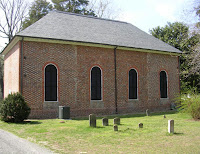 This church is presently a rectangular structure that has endured transitions from its first erection: in 1669 it was erected as a rectangular edifice, transepts were added in 1740 to make it a cruciform church, and in 1832 all but the nave and chancel were demolished. Thus the present church bears little relation in its structure to either church, and it is hard to see, while visiting the site, the exact relationship of the present edifice to the original church. Tom and I had to walk around the site several times and consult the kiosk before we could picture the site of the original church. This isn't helped by the ungainly south porch that is an ill match to the building both in its proportions and details. To view the dimensions of the original church, it is necessary to stand in the set of hedges where the chancel used to stand and mentally rotate the cruciform structure.

The brickwork is in Flemish bond with glazed headers and English bond below the beveled water table. There is evidence of numerous repairs and alterations to the walls. Windows on the ends and the north wall are believed to be original. They are compass framed with semi-circular arches. The southernmost window on the east wall is said to be original by Rawlings (1963, p. 164) while the north windows have original sills (Ibid).

We were unable to get to the interior as the building was locked, but the most appealing attributes are an ancient baptismal font (1718) and a set of chancel tablets bearing the Ten Commandments, the Lord's Prayer, and the Apostle's Creed dating from 1702 and 1718. The chalice, paten, and other silver are from 1669 along with Wicomico's silver from
1711 to 1729 are also part of the parish's interior appointments. Characteristically, the panels and silver from this parish are prominently inscribed with the donating family, the Foxs, reminding me of the essential hubris of Lancaster Church.

This is still an active church with a tasteful set of parish buildings across the parking lot from the church and extensive graveyard.
Posted by Kallicrates at 5:25 AM