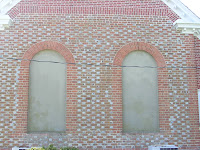 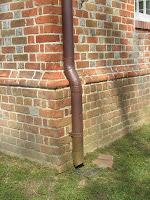 
This cruciform church stands in the middle of a small village in Richmond County just north of Route 3. Is is a Latin cross with general dimensions of 63'8" x 58'2". The nave is 24'3", the chancel 14' long while the transepts are 16'7" long. The extensions of the cross are all 25' wide. Reportedly the walls are 2' thick (all from Rawlings, 1963). I believe I read somewhere that Christ Church in Lancaster County was specifically referred to as the model for this church.

The brickwork has been repointed or replaced at several places, and the gables seem to have been rebuilt completely. Rawlings asserts that the roof was originally hipped like Lower Middesex Church. (Should I get a drawing program and produce a hypothetical hipped structure?) The doorways seem to have been completely replaced with modern reproductions for which the frames were obviously cut and new work inserted. The water table, in English bond, has a subtle cavetto and ovolo pattern while the wall bricks are laid in Flemish bond with glazed headers. For some reason (?), the chancel windows have been cemented in a similar manner to those of Chuckatuck church.

While Tom and I were there, two bricklayers were setting a new walk from the north doorway, and we engaged them in conservation. If the local man who was working there reads this, we implore him to keep his distinctive, fascinating local dialect (accent). I got the other man talking, and we had, for me at least, a most interesting talk about the competence of colonial craftsmen -- he gives them a most high rating -- and the features such as the gauged brick voussiors above the windows and doors that demanded considerable skill and meticulous attention to detail. His opinion was that it actually would take only a few months to actually erect the wall bricks and was surprised that such churches often took years to produce. According to Dell Upton (1986), the undertaker (contractor) would get 90% of the alloted funds up front and, due to lack of impetus and the vestrymen's general wishes, churches often took years to complete. The general tax was about 20 pounds of tobacco per tithable (adult male or slave) per year, but a new church would generally double that tax for several years (Upton, 15-16).

All in all, this is a charming church in an equally charming setting and is well worth the visit. The bricklayers said that they are surprised by the number of visitors from as far away as Chicago to this remote crossroads.
Posted by Kallicrates at 5:55 AM