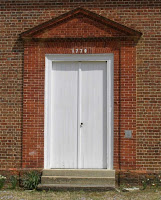 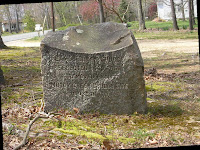 This church is unusual in dimensions, reflecting a change in church architecture in the shape and organization of the building. It is a huge structure, 79'11" x 33'11', approaching the 80 foot limit of audibility in a structure.(Upton, 1985). Tellingly, the pulpit was located on the north wall opposite the south door, thus in the center of the church. In general perspective, the building resembles the meeting house of the northern colonies. It is likely that the south doorway was the main entrance (Rawlings, 1963).

The brick is laid in Flemish bond both below and beyond the beveled water table. The walls themselves show little evidence of repair outside minor repointings and repairs. There is the usual use of rubbed brick in corners and doorways along with queen closers at windows. Because of the length of the church, there are fourteen windows, all covered by ghastly, but most likely, needed metal screens. The wood trim on the north chancel window and the third from western north window are of old, possibly colonial, origin (Rawlings, 1963).

Both doorways are marked by triangular pediments and raised brick pilasters with rectangular wooden doors of later origin. The date, 1770, is prominently incised on the western doorway.

Opposite the western doorway is a boulder with the name and date of erection of the church inscribed on it. The setting, near several houses, and characterized by rank grass diminishes the presence of the building which is set on a small rise near a crossroads just off Route 3 east of Fredericksburg.
Posted by Kallicrates at 5:44 AM

Making money on the internet is easy in the hush-hush world of [URL=http://www.www.blackhatmoneymaker.com]blackhat money[/URL], It's not a big surprise if you have no clue about blackhat marketing. Blackhat marketing uses not-so-popular or misunderstood methods to generate an income online.