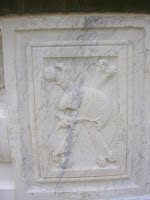 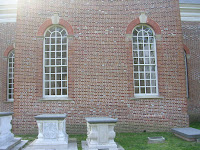 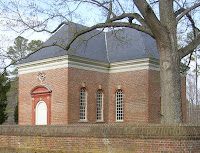 , N37.68173 W76.42296 1728-1732This church is a truly impressive and well-preserved edifice. There is an excellent web site by a preservation organization, so I won’t include all of the data here but just my general impressions.Robert Carter, the immensely wealthy and powerful owner of Cortoman Plantation, directed in his will that funds be used to build a church, and it is worthy of the legendary “King Carter’s” status. The first impression upon approaching the edifice is its sheer size. Although it is not the longest church in the state (that honor I believes goes to Bruton Parish’s 100 foot nave) the Latinate cross-shaped building has walls that are some 33’ high – much higher than that of any other colonial church. According to Rawlings, the cross measures 70’ x 70’, but is longer east to west than north to south, so that it appears to be a Greek cross when viewed close up. The massive roof raises the total height to at least 43’ high. Walking up to it is like viewing a pyramid. The walls are in Flemish bond with random glazed bricks and include elements such as sandstone keystones to the windows and doors. The walls are reportedly 36” thick.
The doors themselves are elaborate and massive. The most awe-inspiring is the west doorway that is 21’ high and has an even larger, intricate pediment. A picture alone can not do it justice. The doors on the north and south transepts are equally as impressive.The Carter tombs on the east side of the church are of marble and feature elaborate carvings of colonial motif cherubs and death heads.
I won’t even touch the inside of the church until I make a visit later this year.The general impression this edifice gives me is one of hubris: Carter meant not only to show faith, if he meant to show it at all, but rather to render his exalted position in the colony. It fits such detail in other churches as conspicuously exhibiting a patron’s name or initials on such donatives as wall plaques or communion silver. Dell Upton calls the rising Virginia a “proud and unlovely people.” It aptly describes the tone of the church. Shelley also wrote about this idea in “Ozymandias” – “Look upon my works, Ye mighty, and despair!” Read the poem for an apt conclusion.Extensive information from the Foundation for is available at http://www.christchurch1735.org/.

Posted by Kallicrates at 7:58 PM