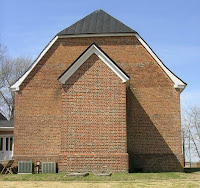 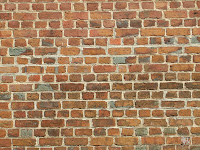 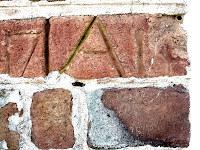 This smallish church, 54'x34', has extra charm because of the clipped gables and kicked eves which give it a distinct, old world look.
The entirety of the church is in English bond which gives it an air of solidity rather than elegance as in nearby Adingdon church. The building is greatly altered from the original in several important respects. The most notable added feature is a small addition added to the east end whose angular looks detract from the basic rectangular structure. The doorways are changed and the windows, according to Rawlings, are lengthened while only the small, elliptical window remains on the west facade and the large chancel window is completely gone.
The interior of the church is in no respect colonial, having been changed in the nineteenth century into a typical two aisle interior with a raised, simple floor at the chancel end.
Among the great treasures of the chapel is a communion chest dating from 1677 and still in daily use. A dating brick with 1715 and the initials of the builder a Mr. Armistead.
The choir director along with a couple working on the windows was at the church when we visited and were most cordial, taking the time to give us a comprehensive tour and explanation of the chapel. A new wing has been added within the last year in as good a match as can be made with new construction. It is good to see such a chapel occupied by a vigorous congregation that understands its historical importance.
Among the anecdotes we mined is that many of the colonial congregation used the creek just to the south of the site to travel to weekly services.
Posted by Kallicrates at 5:50 PM

Thank you for all the wonderful pictures and interesting histories. I did not realize there were so many colonial churches in the area.