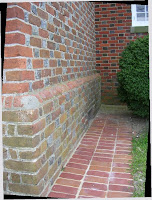 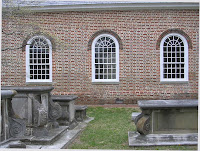 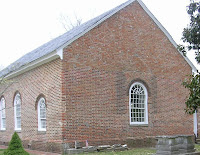 Upper Church Middlesex (Christ Church Middlesex) N37.60474 W76.53437 1714
This rectangular church is average size 60'x331/2' and is laid in Flemish bond (even the water table). It has the typical features of orientation, glazed brick, compass windows, west entrance, and originally a south vestry door (now converted to a small compass window). There is the usual presence of queen closers and rubbed brick at the corners and in the window jambs.

The water table has has a convex curve (ovolo) that gives it an interesting look. The west and south walls have glazed brick in the headers while the north and east walls lack this feature. According to Dell Upton, this indicates not a lack of workmanship on the part of the builder, but the idea that the building was expected to be viewed from the south and west as parishioners entered for services.

On the east, or chancel, end the original large window was replaced by a smaller compass window, but the outline of the earlier, large chancel window is clearly evident. Upton asserts that this is an intermediate form derived from the Y-tracery windows present in seventeenth century churches such as Newport Parish and cites building requests for a large windows in both this church and Lower Middlesex Church. Later churches had compass or rectangular windows in the chancel that generally matched the general size and shape of the south and north windows (in both extant and destroyed churches). This original chancel window was ten feet high and most likely matched the size and shape of St. Peters -- a large, compass-headed one filling a large portion of the east facade. The side windows on the south and north show evidence of extensive relocation and shortening, to me ruining the classical stasis of the facades.

The original doorways are gone, replaced in the west by a brick entry at the east end and a jarringly small window on the south east end. Worse is the presence of additions on the north end that, like the entry, have clearly modern brick with exaggerated dark bricks and modern finish and size that contrasts strongly with the colonial brickwork. The interior, too, is changed beyond recognition as a colonial structure. Next to the church is a private Episcopal school with modern tin-buildings that diminishes the setting.
Posted by Kallicrates at 12:08 PM