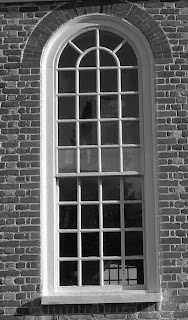 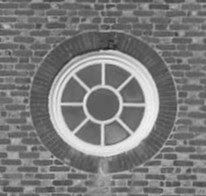 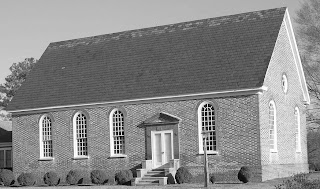 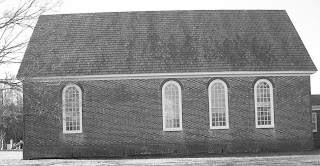 This church, built between 1724-1729, has splendid brickwork in Flemish bond above the water table with glazed headers. The south doorway, in particular, with its square arches and triangular pediment is a wonder to ponder despite the jarring presence of modern storm doors. It is a rectangular church with dimensions of 64' x 33' 9' with 2' thick walls. It sits on the top of a small rise to the south of Route 14 which enhances its presence on a sunlight day. Reportedly there was an earlier church on the site whose presence was revealed by bulldozing possibly for the new west addition? Elaborate details of brickwork and the classical proportions of the building make it achieve the serenity few modern structures possess. I could almost feel the stares of 17th century parishioners as I walked around the building. Sadly, the west face is obscured by a new addition that crudely covers the magnificent pilasters and curved arch of the western entrance door. After the Revolution, the church was deserted and used intermittently by local congregations of Baptists and Methodists. It is now an active Methodist church with modern outbuildings and play apparatus. Modern maps refer to it as Old Church.
Posted by Kallicrates at 5:26 PM