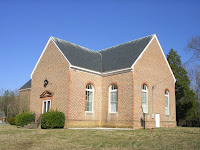 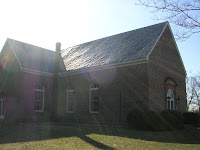 Lower Church, St Stephen's (Mattaponi), King and Queen County N37.71864 W76.88687
After visiting Stratton Major Church, we found St Stephen's a few miles up the road. It, like the former church, is on a pleasantly wooded hill with a cemetery of later origin surrounding it. The church is cruciform with splendid Flemish bond brickwork marked by glazed headers. The doorways are striking, with idendical pilasters with a triangular pediment above the vestry door and a semicircular one above the west door. The bricks here seem to be by the same craftsman as Stratton Major (as well as St John's, King William County). I wonder if there was some journeyman who worked on all three churches? The shape is a Latin cross and has dimensions of 84 1/2' x 64' for the main branches east-west and north-south. It is a huge church that could seat 500-600 parishioners if Stratton Major could seat 572 (according to Dell Upton). The construction date is most likely circa 1730-1734. Another building with classical presence-- well worth more than one visit.
Posted by Kallicrates at 2:33 PM