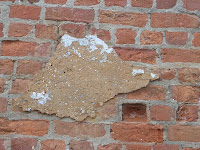 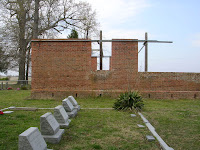 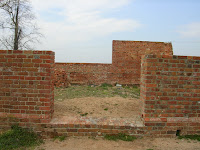 This church was the most melancholy ruin in the state of Virginia with the walls of the church shaded even in the hottest summer by a huge oak to the south-west of the remains. Alas, in 2005 a hurricane blew the oak over and crushed the largely intact brickwork. The local historical society is now rebuilding the walls in correct bond using the droves of original bricks from the walls. The walls are irregularly Flemish or English bond, reflecting the mix of bonds on the original. I ran into a local man who name I promptly forgot and had a good old talk about the church and showed him the Rawlings book I had the foresight to bring with me. All together a pleasant late Saturday afternoon. I hope I run into more local residents as I pursue my project.

There is some confusion in parishes: Lawne's Creek, Chippokes, and Southwark Parish seem to have a rather mixed history from James City County in 1652. Lawne's Creek Parish was formed in 1640? and was represented by a first church on Hog Island near the Surry Nuclear Plant. The exact site is forever lost. According to local historians, the 2nd Lawne's Creek Church is a scant ruin on Route 618 north of Surry, Virginia. I have seen this church referred to as the 3rd Lawne's Creek Church, but Rawlings asserts is was constructed as Southwark Parish and never served any other parish. Oh, well.

The original walls measures 74' x 43', a huge building and were 2 1/2 brick lengths thick. The walls are exposed and are being rebuilt as the original with Flemish bond on the outside and English bond on the inside. A few sections of brick in the northeast corner seem to have old plaster on them with shells embedded in what looks like a mud base. I have seen shells from either the Miocene deposits on the James or, on the Eastern shore, used as driveway gravel or plaster. It this the case here? The building was abandoned from the Disestablishment until 1847, with local congregations squabbling over the building until the Civil War. It was reputedly burned down by local Blacks who wanted to keep using the surrounding cemetery for burials. There is no proof for this assertion. However, the church site is surrounded by a lovely cemetery with, as I have seen, local burials still going in.

There are also numerous cedar and other flowering trees surrounding the site that render it quite poetic. I shall return and take more pictures in late spring. Across Route 10 is Bacon's Castle built in 1665; another site well worth more than one visit.
Added to this post is a picture I found of the interior of the church in the 1980s showing it before the damage of the 2005 storm.
Posted by Kallicrates at 7:37 PM

I hope you get this. I was just at Lawne's Creek Parish in March as my ancestor participated in the 1673 tax uprising centered around this parish. I did not know at the time the facts about this structure- constructed in the 1750's- making it too late. In searching for the location of the earlier churches, I went up to Hog Island and the nuke plant. I gave up, assuming the site has been reclaimed by nature. When I came upon your blog, my heart pounded! Can you tell me any more about the site called "Southwark"? I belive this to be the location of that tax protest. I can be reached at my google mail address- serzone55@gmail.com