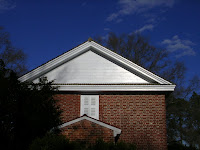 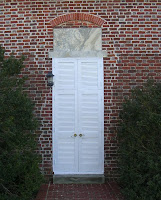 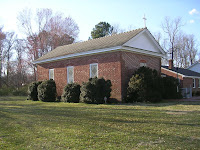 Glebe Church is still an active Anglican denomination in a much changed church of which only the walls themselves remain with a greatly altered set of windows, doors, and particularly the cornice that is a jarring wooden structure on base of irregular brick repairs. The church was abandoned after the Revolution until 1856 and went through a series of changes that leave only the walls -- a portion of them at best -- as colonial. It apparently was built as a small, 49' x 25', rectangular structure and in 1759 an L-shaped addition to the north (where the new addition stands) of 24' x 23' was added. Interesting features such as galleries on both the north and west sides were present as well as a hanging pew in the southeast with an outside covered entrance. There may have been another private gallery added in 1777. Sadly all of this is gone, and the church shows, even superficially, much variation in its brickwork. The north addition was taken down in the alteration of 1856 and the surplus bricks used to repair the original-sized rectangular shape. The windows show a lot of variation, and the present windows are clearly not colonial.
Posted by Kallicrates at 6:09 AM