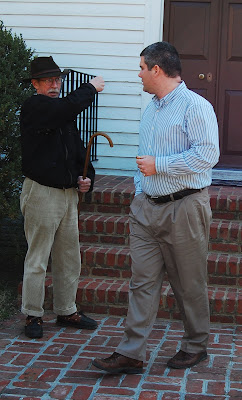 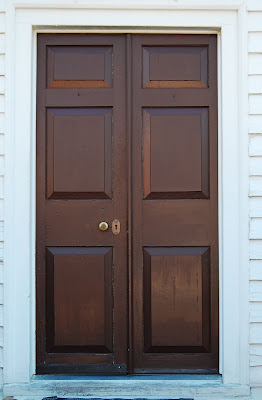 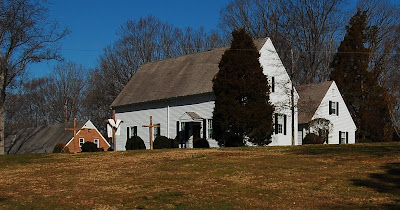 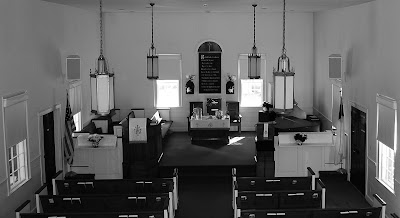 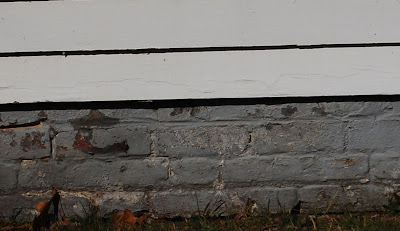 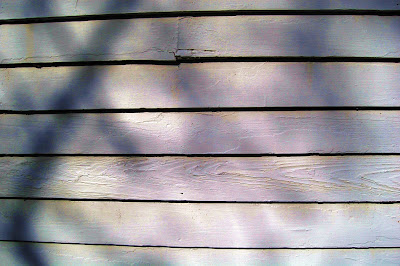 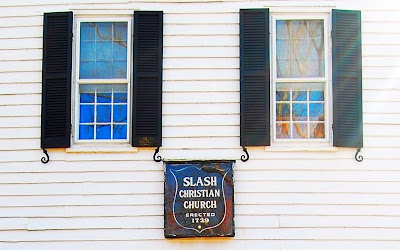 Slash Church is in a rarity of three in Virginia: a clapboard church surviving from colonial days. Remarkably close to Richmond, it has survived relatively intact except, as in most pre-revolutionary places of worship, having massive alterations to the interior configuration. It is easy to find; take the 656 exit on I 95 North of Richmond straight along Sliding Hill Road until it turns into Mt. Hermon Road. The term slash refers to elevated areas in the generally swampy terrain (similar to lights in the Great Dismal Swamp).

The original building, with a similar , but separate structure added a few feet to the north of it in 1955, is surprisingly intact with the clapboards showing inevitable wear yet still relatively undamaged. Its measurements are 60’ x 20’ (measured by Rawlings as 60’ 7” x 26’ 6’’ – as if it changed in post colonial construction?). This makes it just average in size for a rectangular church. Rawlings claims, too, that only isolated clapboards on the east, south and west walls are original while the present pastor asserts that they are largely original with the exception of the northeastern wall which was damaged in a fire in the 1970s along with the floor in the same area. Standing on the top of a small rise to the northwest of Mt. Hermon Road in Hanover County, the first impression is of a pair of buildings similar in construction and proportion to a colonial edifice. It is quite charming and reminds the viewer of stereotypical country churches.

The doors are of simple construction and the west door is of colonial origin as are the sills of the two lower east windows. The eaves contain a toothed decorative motif (modillion cornice) that is original and, in 1963, the interior wainscoting, the handrail, and the west gallery that the pastor claims is structurally sound despite seeming slightly askew. The original wooden foundation sills are still intact but have been set on brick foundations.

Rev. Steve Lesher was kind enough to leave his Bible study group to let us inside and lead Tom, Bill, and me on a guided tour of the inside. The present congregation is vigorous and, pleasingly, composed of both old Hanover residents as well as a sizeable proportion of young families with children filling the building each Sunday. It is good to see these venerable structures still alive and thriving. Their denomination is the Disciples of Christ whose stark worship resembles that of the Anglican simplicity of the Eighteenth Century.

If I make it back again to this church, I will beg to be allowed to stand on a stepladder and see the roof structure which consists of diagonal purlins and beams fastened with wooden pegs that Rawlings says “are arranged in a curious, triangular form . . . [with] no ridge beam.” (104).

Dolley Madison, Patrick Henry, and Henry Clay are claimed as members of this parish, and Henry’s uncle was rector for forty years. Nearby Fork Church also claims Patrick Henry as a communicant? The building was abandoned after the Revolution and was shared by the Methodists and Disciples of Christ until 1842 when the latter denomination acquired its sole use. It was supposedly used as a school and a Civil War hospital? There also was a significant skirmish between Confederate and Union troops on May 27, 1862 in one of the first skirmishes of the Seven Days Battle.

Links to Slash Church are:

I found this site using [url=http://google.com]google.com[/url] And i want to thank you for your work. You have done really very good site. Great work, great site! Thank you!

Hello, I am the historian for Slash Church. Since my congregation declines to post the history of this now 280 yr old church, I have created a webpage as part of my main domain:
www.holdstillproductions.com/slash_church.htm
Included are photos, history & also a link to the author: Micheal C. Hardy for The Battle of Hanover Courthouse/Battle of Slash Church May 1862 when we had 4500 Confederate troops & officers stay in & dig in the building & grounds.
If anyone has any questions, please feel free to ask. I am available for tours w/complete history of this church & the St. Paul's Parrish area (which was all of Hanover County, VA.). Blessings, Dianne A. Jones