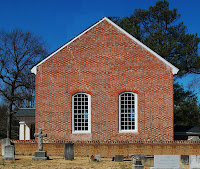 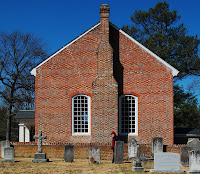 Fork Church is a charming rectangular church located close to Richmond at the western end of Hanover County. To reach it go north on Route 1, paralleling I-95 to the west, and turn west on Routh 738 for a refreshingly bucolic trapse.

It is slightly larger than typical churches at 74’ x 34’ and has gorgeous brickwork noted by Rawlings (1063 142ff). The bricks are laid in Flemish bond with glazed headers throughout. A supremely ugly brick chimney is placed between the two chancel windows. The water table seems relatively high (I should have measured it.) and is laid in English bond. Beautifully toned rubbed brick marks the corners and the windows with some regularity. On the spring day we visited, the light brought out all the subtleties in those tones from deep red to rosy red. The windows themselves are in the form of beautifully proportioned segmental arches. The brickwork at the east and west end tops is obviously replaced; Rawlings hypothesizes this as evidence of original clipped gables (143).

The doorways have been altered by the addition of cumbersome, pillared porches with crude triangular roofs and equally clumsy decorative eaves (modillions) and matching half-columns (pilasters) on the walls. The columns are made of white painted brick and taper from bottom to top (classical entasis). Rawlings dreams fruitlessly of the restoration of the original doorways in his 1963 text (144).

For lovers of intricate window frames, this is Elysium. Rawlings describes them in some detail on page 144. I should have thought to take close-up pictures of them. Maybe next time.

The pews are largely original but substantially altered in height from a 1930 remodeling while the pulpit was moved from the north to east to north again. The oak floors are very likely original; this church never had the common flagstone floors typical of most colonial churches. There is a west gallery that is original along with an organ from the mid nineteenth century (Rawlings 145).

There is a large marble font from Mattaponi Church in King and Queen County, but no parish silver as it was destroyed in a 1936 fire.

The churchyard has many internments but none of colonial times and has the strangest, most clumsy wall around some of the older graves. It was erected from the east end of the church ten or so feet from the chancel wall and runs in a thin rectangle for a hundred feet or so. The brickwork in the wall is sloppy and irregular as is the wall capping. The graveyard, though, is worth a good hour of exploration.

Dolley Madison and Patrick Henry along with the novelist Thomas Nelson Page at least occasionally attended here and the actress Katherine Hepburn’s grandfather, S. S. Hepburn, was rector from 1893 to 1903.

All in all, Fork Church is a charming edifice with admirable brickwork. As a editing experiment, the first image shows the east edifice without the chimney.
Posted by Kallicrates at 5:43 PM