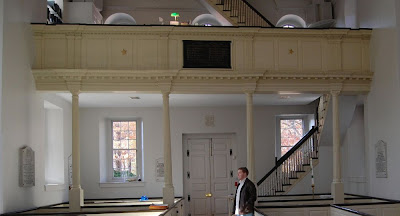 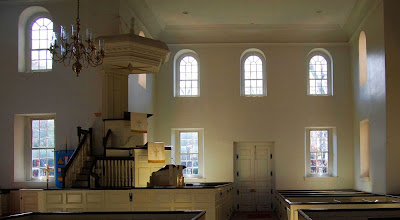 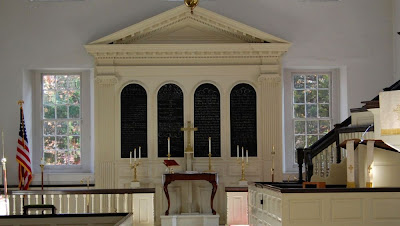 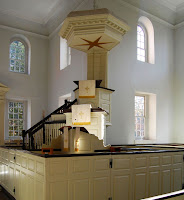 The interior of this church is the most original of all extant true colonial churches. I shall, with my non-architect’s eye, attempt to describe the general features.
Check the size of the church and be prepared to be overwhelmed by its sheer size and openness. The white walls and recessed window enclosures admit a brilliant amount of light on a fair day. The frames of both upper and lower windows are said to be original (Rawlings 195).
To the east is the altar and a magnificent reredos with well preserved moldings. (For a full analysis of the moldings, see Rawlings pages 190ff.) Below the beautifully proportioned pediment is the main panel bordered by ionic columns. The four insets bear, as they would have in colonial days, the Ten Commandments, the Lord’s Prayer, and the Apostles’ Creed. Compare this reredos to that of Abingdon Church that is too wide for the space between the chancel windows; Rawlings concludes that the Abingdon reredos was moved from another church. The cross, of course, would have not been displayed in a colonial Anglican church. Amazingly, the communion table is of colonial origin; Rawlings cites the lack wear such as kick marks an indication that it was always used for sacerdotal purposes.
The pulpit is also truly magnificent. It has fully three levels and a stairway with a sharp turn that was almost dismantled and sold just after the Civil War because the vestry, including a brother of R. E. Lee, found the elderly rector could not ascend the stairs. The three levels are from bottom to top: for the recording clerk, the delivery of the service, and for the sermon. I believe I have read that the other triple-decker pulpits such as Bruton Parish, Abingdon, or Lancaster are reconstructed in the image of this one.
The box pews are also original with some planning and alterations but have survived relatively intact. Rawlings (193) describes the panels as having a small horizontal panel over several vertical lower ones. Raised panels on pews face the altar rather than the sides or back. There are also original raised panels below the benches along the walls.
The west gallery is given a page and a half of development by Rawlings who waxes ecstatic over the moldings, pilasters (half columns fixed to the wall), and free columns. To my non-trained eye, it seems distinguishably crooked with age.
The floor tiles date from a restoration in the 1933 for the chancel and just after the Civil War for the crossing. Supposedly the crossing tiles were taken from a family cemetery at an antebellum plantation, Windsor Forest, belonging to the Moncure family.
I despair that I took so few pictures of the interior.
Posted by Kallicrates at 5:30 PM