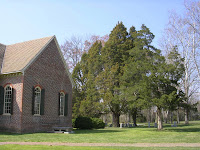 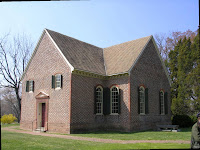 This delightful building lies just to the north of Route 17 in Essex County between Port Royal and Tappahannock. There are several interesting features of the structure, so I will post different blogs about the exterior, the interior, and the stories about the church.

Vauter's Church is a T-shaped building with the offset to the south -- the best preserved church of its type in the USA. It is the fourth (?) building of St. Anne's Parish and the first brick church of the parish. St. Anne's Parish was founded circa 1704-1711. Rawlings and Upton both consider this church as a modified one with the basic rectangular structure erected around 1719 and the southern T erected in 1731 according to the dating brick. The present rector, Dr. Agnew, states from his examination of the rafters on a crawl though them that the structure was originally erected as a T-shaped structure in 1731?

In any case, the location of the church on a small knoll surrounded by picturesque trees and a small graveyard, makes this the most pleasing site I have visited so far. The rectangular east-west structure is 56'6" x 30'2" -- of average size -- while the T-wing is 30'2' wide by 16' long. The T of the chancel is 10'3" wide. Rawlings cites the irregular placement of the southwest windows so that the shutters overlap and irregular flagstones in the aisles as evidence of later construction of the south wing. I, sadly, didn't think to examine them. The walls are 2' thick.

The walls are in superb shape with the checkering of the glazed brick particularly noticeable. The water table is beveled with the expected English bond below and Flemish bond above. A small number of glazed headers are used in the water table itself. Along the angled rafters of the roof (barge boards) is a row of glazed headers as, to a disorganized extent, in Yeocomico and, in a similar manner, in St. John's, King William. Rubbed brick is present in doorways and window jambs, and there is as well fairly consistent use of queen closers in doorways and windows.

The doors themselves are possibly the oldest ones in the state; an interesting feature of the south doors is that they seem to have been put on backwards -- the door panels are concave instead of convex and the weathering on them suggests that they were always that way. the size and spacing of the arches shows great craftmanship. The south door has a triangular pediment while the west door has a semicircular arch as seems typical in these Northern Peninsula churches compared to those south of the James. The pilasters also show great evidence of symmetry and master brickwork.

The windows have circular (compassed) arches with some replacements in the arches. The west facade has two small windows for the balcony that are square with semicircular arches. The roof appears at first to have a consistent angle but is actually kicked gently at the eves, giving it a graceful look.

All in all, this church is beautifully preserved in an idyllic setting and a must visit. It is still an active congregation, and while, we were there, a tour bus arrived, and we were invited by the genial pastor and visitors to tag along with them.

The
Posted by Kallicrates at 8:48 AM