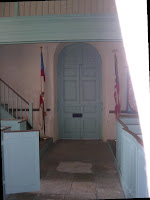 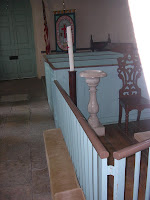 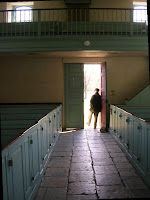 Another unique aspect of this church is the interior that is one of the few relatively intact ones from colonial days. For some reason, I didn't take extensive pictures, but I will remedy this in a future visit.

As already mentioned, the doors are probably the only original ones still in situ and are in amazingly find condition. Even the frames and moldings are in excellent shape; note that they reflect the general Northern Peninsula structure with a semicircular arch over the west door and a triangular one above the southern one. For a close description read Rawling's book pages 92ff. Note the differentiation between the pilasters (bas relief columns) beside the doors and the square voussoirs above the south door based on continuing the lines of the circular or flat arch. The windows, too, are of colonial origin if not original including the compass frames for those in the walls and the semi-arched square sash windows above the south door to provide light for the balcony.

The flagstones of the aisles are most likely original, but the chancel was first paved with bricks removed in 1925. The wooden floors under the pews are said to cover remains of bricks. The chancel was in colonial days in the east but was moved to its northern, central location in 1827 when the church was renovated. At the same time, the pews were cut down to the present height of three feet or so (I need to measure), but the doors, hinges, and rail caps are original. The present color, a pleasing light blue, is according to Dr. Agnew, derived from colonial paint samples found within the church.

The pulpit, which originally was a three decker with a clerk's deck, a reading desk, and the pulpit itself, was replaced with a simpler, one-level pulpit in 1827. It may has stood against the north wall as it now does, but there is little evidence for the original placement. The interior is plastered with a flat ceiling. From the level of the pulpit, the minister is level with the balconies in the west and south -- not a place for one with vertigo.

All in all, the interior like the exterior of the church is charming and truly evocative of a different era. Like Merchant's Hope, it lets the viewer step back into another era and be surrounded by the past.
Posted by Kallicrates at 3:49 PM

Little Vauter's Church has always fascinated me from my first visit in the mid sixties to a later visit a few years ago during Virginia Garden Week. It's "aura" and location invoke the "colonial". The birck work is beautiful whether viewed on a cloudy or sunny day.

Like this blogger, I, too, did a visit of the remaining colonial churches after graduation from W & M and used Rawlings' book as a guide. Since then I have been fascinated by the Virginia Colonial church - its history and architecture and have collected several books on the subject.

Merchant's Hope, I think, is the most true of the remaining churches. It's isolation gives a sense of what it must have been like in the 18th century to arrive for church, really as an outpost.

I have found this blog quite interesting. Thanks for sharing.
tomrcor@aol.com

Thanks for the comment. Yes, Merchant's Hope is the pristine example of a colonial church. I admire its classical simplicity and stark proportions.

I noticed that you referenced Dell Upton's book as well as others in your entries.

You might be interested in a new publication "The Beauty of Holiness - Anglicanism and Architecture in Colonial South Carolina". Yes, it's not about VA, but it is fascinating in much the same way that Dell Upton's "Sacred and Profane" is. The author is Louis P. Nelson, published 2008 by Univ. of NC Press, Chapel Hill.

Thanks for the new reference. I plan to post a blog entry about a non-Virginia mid-nineteenth century church in the mountains of North Carolina.