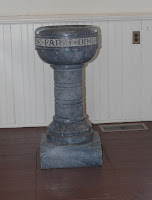 This rectangular church, like most, is not the first near the site but the exterior in general remains in a state of remarkable preservation. It is located a half-mile or so to the east of Route 5t in a grove of trees beyond a brick and iron gateway. A colonial cemetery surrounds the church and the later, but matching, rectory buildings within the churchyard.

The parish itself is one of the oldest in America, dating from the mid 1620s and, in the early days, encompassed the land on both sides of the river until the establishment of parishes on the other side of the river. Most likely the present edifice was moved after permanent churches were built in surrounding areas.

The walls are laid in Flemish bond with glazing on all sides with a two-row layer of English bond in the very shallow water table whose top row is beveled. It is of average size – 60’ x 28’ and has clipped gables with a cedar shake roof as most churches originally did. There is rubbed brick at all four corners and around the windows. The west doorway was repaired in 1956 and is obviously of new brick while the arches above the windows were repointed in rowlocks that do not match the colonial brick. Rawlings considers the rubbed brick throughout the structure similar to that of (1964 117). Queen closers are used are corners and windows. The window above the west door is inserted on what looks like a larger window (to my untrained eye), but the greatest changes are on the east façade that seems to have three openings but at present only one narrow window that is not at all colonial character.

The greatest changes are in the interior that is still one large room with a gallery on the west end and low slip pews with doors that are a post Civil War alteration due to Yankee destruction of the interior. In 1867 the east end was altered to make a deep chancel with small vestry rooms on each side of it. The Ten Commandments are posted to the side of the narrow window with a communion table and an altar rail before it. On the north side of the chancel end is a stone baptismal font; the pulpit, more correctly a rostrum, is on the south side.

I wonder about the windows. Rawlings does not mention them, but the mullions, particularly the y-tracery elements at the top do not seem colonial. He also mentions the lack of clipped gables, so the roof was redone after 1963? One element of the roof’s restoration that seems curious to my eye is the height of the windows. They are so high as to actually touch the eaves that are decorated with a dental molding that seems quite new. Did the parish lower the eaves with the clipped gables were restored?

All in all, this a pleasant edifice in an equally pleasant setting and well worth a hour or two visit; be sure to examine the graveyard as well as the church.

Posted by Kallicrates at 6:24 PM

Anonymous said...
This comment has been removed by a blog administrator.
November 8, 2009 at 9:22 AM